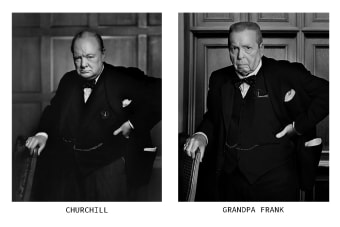 For our first semester of year two of the Niagara College Photography program we had an assignment within our portraiture class to recreate an iconic photo by Yusef Karsh. I had been dreading this assignment for awhile because you’re given the photo you need to recreate in class and then have to source a model that somewhat resembles the model Karsh had in his original image. When the images were being displayed to the class I was incredibly happy to have received an image of Sir Winston Churchill taken by Karsh because I had the perfect model for it, my Grandfather. The object of this assignment was to attempt to capture the unique lighting that Karsh used within his portraits. After being assigned my image I then went to my grandparents house to ask if he would be willing to model.

My Grandfather is a very particular man and is often in charge and fussy over how things need to be done, which may have rubbed off on me a bit over the years. I gave him the photo that we were to mimic and left him in charge of collecting the proper clothes from the thrift stores as I studied the image to figure out exactly how I would be lighting him. A few weeks later our scheduled shoot date had come and we were ready to go. I had booked the studio for 3 hours to make sure that the photo went well. It felt really good to me having my grandparents in the studio, most of my life I didn’t have much of a skill I could share with anyone and I was quite proud to have them watch me work and be the subject of my work. I can remember my fellow classmates commenting on how cute my grandparents were which only made it a fonder memory for me.

When actually shooting the image I remember my grandfather being mildly uncomfortable with the pose he had to be in. We had his outfit all safety pinned together and him and I had a few brief arguments on which position was more correct for the photograph.

We had taken a class trip to Casa Loma in Toronto for our architecture assignments where I took a photo of some wood paneling to act as the background for the photo of my grandfather in the churchill recreation. Shooting this became a problem when i came to perspective, having to stretch and alter the photograph of the wood panel in a way that made him seem like he was supposed to be within the image.

In the end and after many hours I had an image to be proud of. I created a very interesting recreation of a famous photograph with my grandfather. A photo I’ll have with me for all my life, a photo that they have hanging in their bedroom that they show off to guests because he’s such a good churchill. The largest difference between the two is my grandpa still has a full set of hair. Many things in life that seem to be a burden seem to change into a blessing. I dreaded this assignment and it turned into a great memory of me and my family.

There are currently no posts available. Please check back.